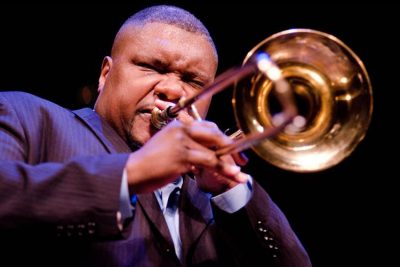 Wycliffe Gordon’s unmatched mastery of the plunger mute, his exceptional technique, and his signature sound have given him a place in musical history as one of the top trombonists of his generation. The Jazz Journalists Association has named him “Trombonist of the Year” 11 times, and he has received numerous other awards including the coveted “Louie Award” presented by the Louis Armstrong Museum and the International Trombone Association Award, which recognizes the highest level of creative and artistic achievement.

In addition to an extremely successful solo career, Gordon tours regularly with his own quintet, headlining at legendary jazz venues and performing arts centers throughout the world. He is a former veteran member of the Wynton Marsalis Septet, the Lincoln Center Jazz Orchestra and has been a featured guest artist on Billy Taylor’s “Jazz at the Kennedy Center” Series.

Gordon has an extensive catalog of original compositions that span the various timbres of jazz and chamber music and is commissioned frequently. Musicians and ensembles of every caliber perform his music throughout the world and his arrangement of the theme song to NPR’s “All Things Considered” is heard daily across the globe. His arrangements are also frequently heard in film and television, including in “Race,” the biopic of track legend Jesse Owens; “NCIS: New Orleans”; “Manhattan”; and the Netflix show “White Rabbit Project.”

Gordon’s recordings are a model of consistency and inspiration. In 2016, he released his 21st solo CD recording titled “I Give You Love”—a follow-up album to his very popular “Hello Pops: A Tribute to Louis Armstrong” CD.

In addition to performing, composing and recording, Gordon is one of America’s most committed music educators. He has given master classes, clinics, workshops and lectures to young musicians all over the world. Gordon currently serves as Director of Jazz Studies at Augusta University in Augusta, Georgia and is Visiting Artist in Jazz Studies at Arizona State University in Phoenix.